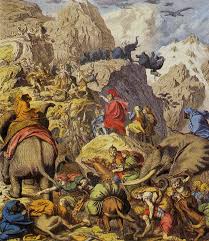 Tour History – Hannibal and the bloodiest battle ever in history …Cannae. A slightly horrific way to start the New Year… A day when 70,000 men were killed….this figure stands as the most men killed in a single day’s battle, the equivalent of the nuclear bomb’s death toll at Hiroshima and this was all hand to hand combat. Southern Italy, just north of Bari…the land is flat and featureless, cruisy cycling, and you can easily imagine vast armies manouvering against each other. The battlefield can be viewed from Canne della Battaglia, a medieval town that was abandoned in the 16th century, which sits on a rocky hill and stands out on the landscape as the only high point. Hannibal’s tactics in this clash are still taught in military colleges today. Poylbius estimates Hannibal had close to 40,000 infantry and 10,000 cavalry versus the Roman force of 80,000 infantry and 8,000 cavalry. He lined up his inferior force with the cavalry on the wings and the infantry in the centre. He positioned his infantry in a convex curve towards the Romans, with the weakest troops, the Celts and Spaniards, at the closest point to the enemy. The Romans lined up in a similar fashion but due to their superior numbers they deepened their lines creating a vast, heavy force of infantry in the centre. The Romans were commanded by two consuls – Varro and Paullus. Paullus was known to have taken advice from Fabius Maximus ‘The Delayer’ and was not keen to engage Hannibal in battle. Varro on the other hand was eager to prove his valour and take the fight to the invader. The Roman system at this time was to have alternate days of command so when it was Varro’s turn he immediately took his chance. The battle began. At first the Celts and Spaniards held their line but before too long the heavy Roman infantry broke through. Hannibal’s weak centre now bowed inwards and the Romans surged after the fleeing enemy. The cavalry clashed on both sides of the infantry. The Numidian cavalry engaged with and inflicted heavy casualties on the Roman force on their wing. Their method of fighting was unusual – they would avoid engaging with the enemy and continually charge and retreat throwing spears and circling away to do this over and over again. Their light armour and great skill allowed them to do this without being caught by the more cumbersome heavy cavalry of the Romans. Meanwhile Hasdrubal had virtually destroyed the cavalry on the other flank and charged across to support the Numidians. The Roman cavalry on seeing their approach, fled, Hasdrubal (not Hannibal’s brother – Hasdrubal was a popular name!) then left the Numidians to deal with the fleeing enemy and turned to aid the infantry. By this time the Romans had forced their way deep into the enemy infantry line and now the heavy African infantry were aligned on their sides. The Africans turned and attacked the flanks of the Roman force and soon the Carthaginian cavalry arrived and attacked their rear. The Roman infantry was surrounded – Hannibal’s ‘double envelopment’ was complete. The Roman’s were slaugtered – Polybius estimates that close to 70,000 Roman’s died at Cannae, including Paullus with Varro fleeing the battlefield. Hannibal also captured 10,000 Romans from their camp. He attempted to ransom these men back to Rome but the senate refused and they were put to death. Taranto and many of the coastal towns came over to Hannibal. Rome feared he would appear at their gates at any moment. But to the surprise of his enemies and his allies, Hannibal decided not to follow up his great win by attacking the eternal city. Hannibal’s cavalry commander, Maharbal told his boss that if he seized the advantage now he would be dining in the Capitol in a matter of days. When Hannibal refused, Maharbal retorted that Hannibal knew how to win a battle but not how to follow up his victory. Whether Hannibal lost his opportunity to conclusively defeat his foe is still debated by historians today. The war against Rome would continue to be fought in Italy for more than a decade.