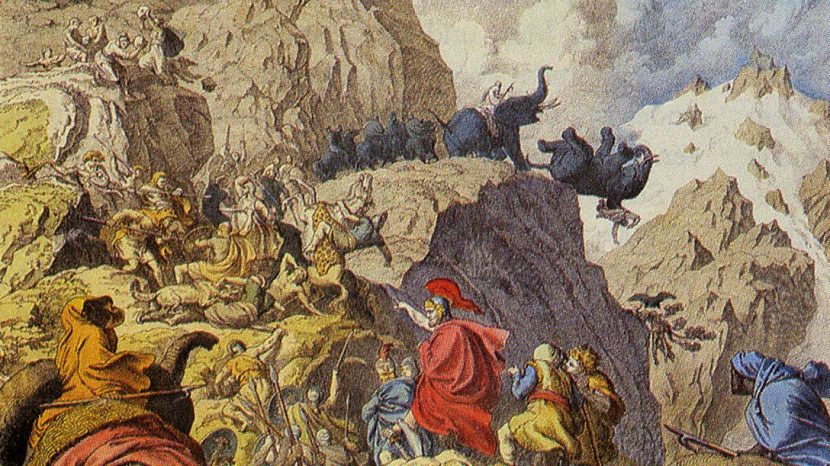 Tour History – Hannibal and his Elephants…over the Alps…. Hannibal is best known for crossing Europe’s biggest mountain chain, the Alps, into Italy with about fifty thousand men and forty elephants. More than two thousand years later we still don’t know which path he took and this mystery continues to puzzle scholars and amateur adventurers. History’s heavyweights like Julius Caesar and Napoleon Bonaparte had opinions on Hannibal’s route and over the years more than half a dozen possible mountain crossings, or cols, have been proposed. There are no archaeological remains of the crossing (perhaps surprisingly, no one has yet excavated in the Alps looking for evidence) so our guides are literary and well known to Hannibal fans: Polybius and Livy. The problem is that neither writes in much detail about the Alpine crossing – Polybius, for instance, devotes only six pages out of nearly three hundred and fifty in his Rise of the Roman Empire. Livy devotes about the same quantity, and rather annoyingly seems to have known what pass Hannibal took but doesn’t actually say which one it was. In Book XXI he writes: “I can’t understand why there should be any doubt about the route he [Hannibal] took over the Alps…”. But some academics, like Emilie Emptoz, a Hannibal and Scipio specialist from Grenoble University, think this mystery is what is most compelling about the whole Hannibal story. Nonetheless, every time we ride over the Alps on the Hannibal- Barcelona to Rome Adventure we try to solve this puzzle, or at least test the compatibility of the pass we ride against criteria that Hannibal scholars use for this purpose. Those criteria are lifted directly out of the descriptions of Hannibal’s crossing in Polybius and Livy, and include these seven: A big bare or white rock where Hannibal sought refuge with part of his army when he was ambushed by hill tribes A site suitable for an army to camp, on or near the summit A spectacular view of Italy from the summit A descent that is steeper than the ascent High enough altitude to be cover snow and ice on it all year round Evidence of a landslide on the descent and burnt rocks where Hannibal forced his way through using fire and vinegar to crack open the rocks blocking his path Pasture on the Italian side after the steep descent