Newcrest Orange Challenge 2018 - A great day on and off the bike. - Bike Odyssey
Skip to content 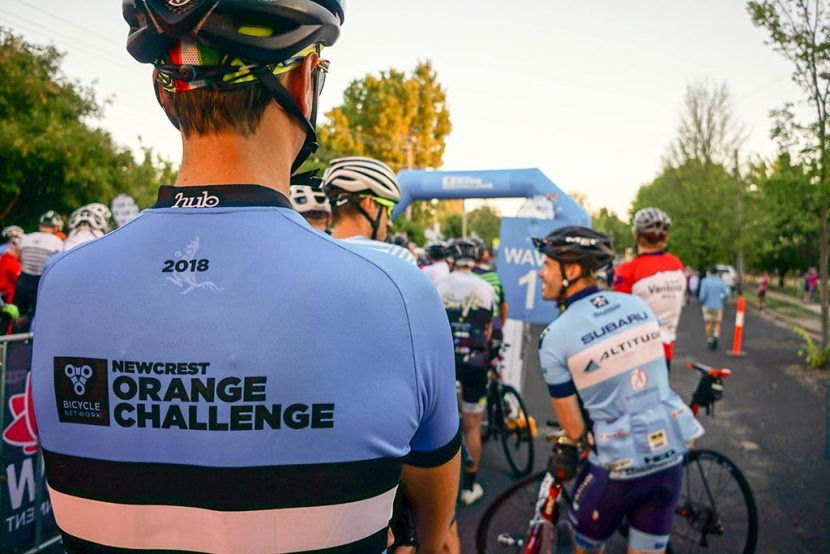 The buzz at the Newcrest Orange Challenge was up there with the very best of bicycle hives. The hum of Chris King free hubs droned musically as we rolled through the full-moon basked day-break. The dull gleam of titanium threw a myriad of reflections from the party lights of a thousand flashing bikers and the swarm of blue and black – and every colour of the rainbow – that was about to eke out over the pulchritudinous countryside. 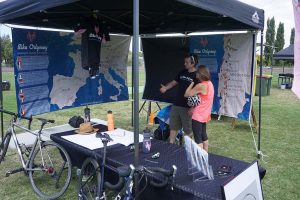 The race and its beautifully constructed fluidity was the inevitable result of a successfully functioning team, which keeps Bicycle Network at the pinnacle of the bike events program. From the moment we arrived as team Bike Odyssey / Dhuez, we were struck by the calm assuredness of the Bike Network personnel: led by Jamie, Felicity and Al, who (with their scores of willing comrades) were about to launch 1400 riders through the Orange hinterland. Riders finishing their dash, made their way back to the coolest of ‘bike villages‘ for artesian beer and cider, mobile caffeine hits, bike merchandise and a plethora of cool gifts, all the while chilling with other like-minded folks under the umbrella’d ambient of live music or blissful massage rehab.

The challenge’s commencement was fantastic in its simplicity, and the feisty field of fourteen hundred felt like a single, multi wheeled organism as we oozed out onto the ample streets and off towards the fading silhouette of the full moon.  My own experience of a seamless departure was confirmed throughout the day as beer sipping ‘Argos Fideli’ and bike touring enthusiasts conferred about the smooth and hic-up free ride we had all enjoyed (not always the case with such grand numbers).

Of the ride itself, the first half an hour delivered a fitting synopsis. Once out amongst the surrounding slopes, the joyous roly-polys were a brilliant announcement to the 170km ‘odyssey’ as the mini-peletons and adrenaline-fuelled punters descended with gusto and attacked the steep gullies with intent. As the packs stretched out into scattered groups which jostled contentedly into formation, the comforting whirr of ‘peletonitos’ and their unspoken hierarchy formed neat, humming bundles of bike energy, bound for the picturesque Belubula catchment towards Canowindra. 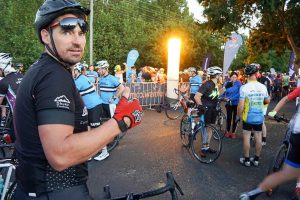 Our own 80km loop was pure joy as we soaked up the fervour of the early morning roller coaster and a wonderfully relaxing spin as we descended to the outer slopes on the wheels of our benevolent domestiques. It was with great reluctance that we peeled off and cruised back to the village as our team disappeared into the pastoral backdrop to enjoy the trundle through the tablelands.

We had plenty of time to reflect on this new challenge as we churned back up to the ridgelines. As international tour organisers and veterans of the cycling world, we deconstructed the ride and its setup thoroughly and agreed that the Newcrest Orange Challenge ticked the boxes with aplomb. From the super friendly country folk in the pub’s restaurants and motels to the faultless organisational dynamics of the network team and awesome ambient in the village hub; Orange was a wonderfully balanced bike event. 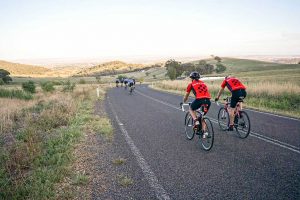 While meeting with tour Fideli is always the greatest of pleasures, there is something special about feeling instantly accepted by a new crowd. We put some of our experiences down to fortunate timing but in contemplation, realised that much of our enjoyment came from the way everything gelled so well; creating a harmony of bike lovers that could be enjoyed on many levels.

It is possible to feel quite at sea with 1400 new faces but the familial vibe was harnessed perfectly and I give a glowing Kudos to the organisers and willing recipients of Orange for a spectacular bicycling weekend! We look forward to seeing you on tour, the next event, or back in Orange for next year’s challenge!