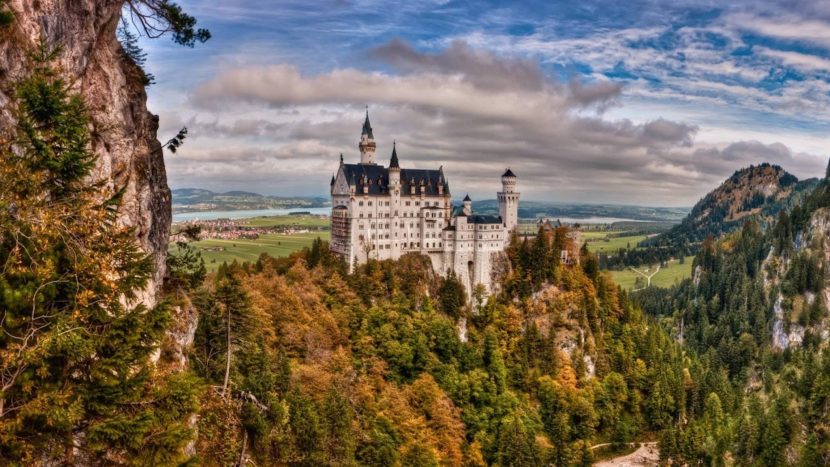 Bike Tour History - Neuschwanstein Castle - The most impressive castle in the world?

Even though I am primarily a Roman archaeologist I do love castles and have worked on medieval sites so jumped at the chance to create a unique bike tour - Lionheart - 'set' in the medieval period really appealed especially as it gives us an excuse to find castles to stay in!

Neuschwanstein is renown as one of the most spectacular castles in Europe - I did mention the world but I guess castles are really limited to Europe, the Middle East and I've seen some great ones in North Africa. Sorry US readers Hearst Castle doesn't count although it is very good! As for Iandra Castle near Young, Australia I never got there in my time in the country but it doesn't have too many similarities to Neuschwanstein!

The shy King Ludwig II built the castle in order to withdraw from public life but actually slept only 11 nights in the castle! It was only seven weeks after the his death in 1886 that Neuschwanstein was opened to the public.

Today Neuschwanstein is one of the most popular and most photographed of all the palaces and castles in Europe. Every year 1.4 million people visit "the castle of the fairy-tale king" (Sleeping Beauty's palace was based upon it). In the summer around 6,000 visitors a day stream through rooms that were intended for a single inhabitant and most importantly there is even a strava section up to it!

We also visit some battle-worn castles too such as where Lionheart himself was imprisoned in Durnstein on the Danube....

The legend of Richard the Lionheart says that upon returning from the Crusades, the English King tore up the Austrian flag and refused to share his spoils of war with Leopold V. Consequently, Leopold V held the English King prisoner in the castle from 1192 – 1193.

The royal prisoner was permitted to receive travelling singers (Troubadours) for his entertainment. The story goes that the King’s faithful entertainer Blondel (imortalised in a West End Musical in 1983 - youtube it if you dare!) went from castle to castle until he found him in Dürnstein by singing a refrain, which the prisoner sang back. Richard the Lionheart was released after the payment of a ransom of 150,000 silver marks.

If you read this far well done! Pop me a message below to prove it!

To explore this rich history for yourself, visit the Lionheart Bike tour page and get in touch with the team at Bike Odyssey

One thought on “Neuschwanstein Castle”