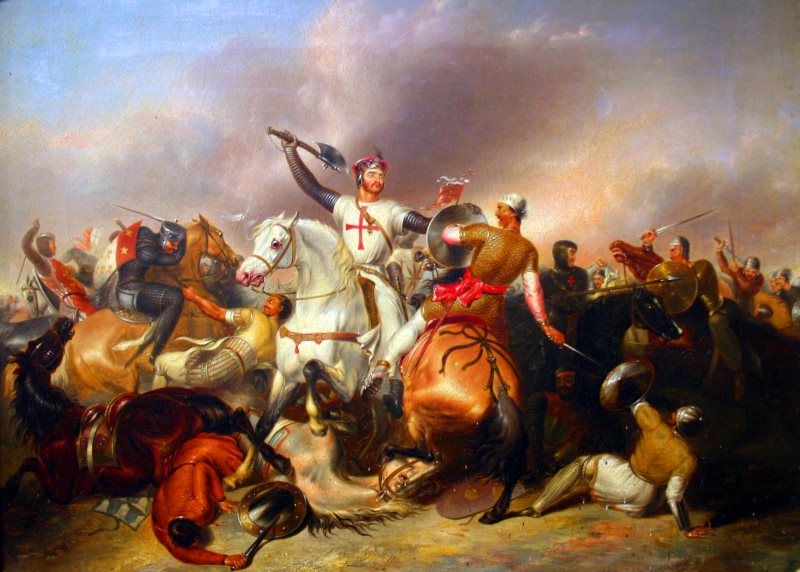 As King Richard the Lionheart lay slowly dying of a gangrenous wound in the Limousin region of France in 1199, he said to his mother, Eleanor of Aquitaine, pardon the bold boy Pierre Basile!

Rolling back 2 weeks in history…

March 1199, Richard is marauding in Aquitaine subduing a revolt by the Viscount of Limoges. The fortifications at Chalus took his fancy as there was a rumour that the castle housed a Roman treasure trove….. As the King inspected the work of his sappers who were trying to undermine the castle walls and took a few potshots (practicing his bowmanship!) at the tiny garrison of supposedly 2 knights and some servants of the Viscount of Limoges, Pierre Basile, also known as Bertran de Gurdun and John Sabroz (which suggests no one actually knows his name), took advantage of Richard’s recklessness. Pierre, who had earlier in the day been fending off arrows of Richard’s men with a frying pan – they were a little short on weapons on armour – fired a crossbow bolt in the king’s direction. Richard applauded the crossbowman’s audacity! However, another bolt struck the king in the left shoulder near the neck!

Richard offered a chivalrous salute to Basile for his marksmanship, however not wishing to alarm his men or reveal the extent of his injury to the defenders of Chalus, he returned to his tent. After attempting to remove the bolt himself, he called the surgeon Hoveden. He removed the arrow, but not cleanly or quickly and Gangrene set in.

Richard asked for Pierre to visit him. Basile, appeared before the king, expecting to be executed on the spot. The boy spoke first, saying he had tried to kill Richard because the king had killed the boy’s father and two brothers.
“Live on,” the king replied, “and by my bounty behold the light of day.” He ordered the boy set free and, further, sent him away with 100 shillings. Deliriously jubilant at the king’s decision, the boy quickly returned to the castle.

12 days after being struck by the crossbow bolt, with his mother Eleanor of Aquitaine by his side, Richard died in Chalus. For the defenders of the castle, Basile’s marksmanship earned them a terrible fate. Mercadier, who had entered the king’s service in 1184 and fought in battles in Berry (yes Berry!) and Brittany, Flanders and Normandy, brought the siege to a swift conclusion. Hanging the defenders, he took the boy Pierre, against Richard’s chivalrous wishes, and flayed him (removed the boy’s skin while he was still alive), then hung him.

It is good not to live in medieval times, although sometimes I do wonder if we have improved!!

Another of Richard’s deathbead wishes was to see his body parts buried in different parts of France. His entrails were buried at Chalus, his body at Fontevraud with his family and his heart, which we follow was buried just north of Paris at Rouen. Check out the Lionheart cycling tour

To discover more rich history with a Bike Odyssey cycling tour, get in touch today!