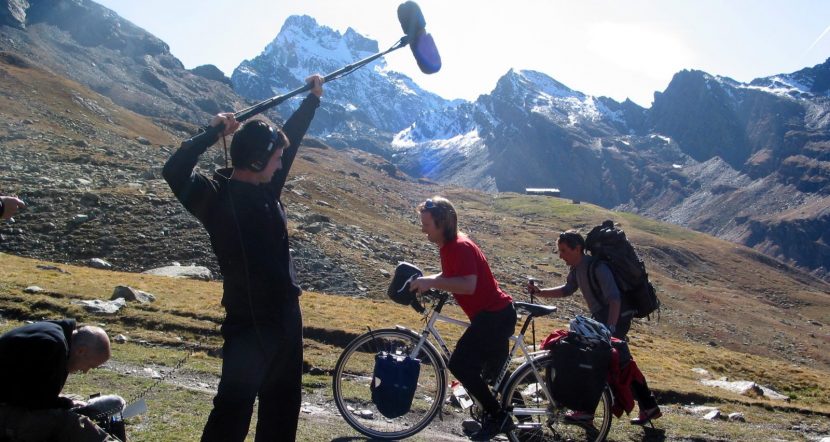 The Origin Of Bike Odyssey

Where did it all begin? I think it’s fair to say that Bike Odyssey mastermind Sam Wood’s original inspiration for his bicycle touring company came in the mid-1980s. During those important formative years the seeds that would create this epic history based cycling adventure extravaganza were sown. I should know, I’m his oldest brother.

Back then Sam was only about eight years old but his quick wit, intelligence and adventurous spirit granted him easy access to the hallowed halls of older brotherdom and the sibling world of Ben and myself.  At that time – 1985 – the three of us were all captivated by a history series called In Search of the Trojan War. This BBC documentary was written and presented by Michael Wood (no relation as far as we know), an intrepid English historian and journalist described as ‘the thinking woman’s crumpet’. The series consisted of Wood trapesing around Greece and Turkey, visiting archaeological sites and following the trail of 19th century German businessman turned archaeologist Heinrich Schliemann. Schliemann was the guy who came up with the hair brained plan of trying to find the real, historical version what many thought was the mythical city of Troy as described in Homer’s Iliad – and he actually found it! Or at least a site with numerous castle ruins, one of which is very likely Homer’s Troy.  Michael Wood’s Shakespearean presentation style and his enthusiasm for the subject matter made for a great series.  Here’s a YouTube clip of this classic series.

Okay, maybe you aren’t convinced – but we were! As you can hear, the music was also terrific and very atmospheric (come on! You have to concede that!) We had a favorite song from the series called ‘Nessus Waspus’. I have no idea what Nessus Waspus actually means, but this track was played whenever Michael W. was talking about something mysterious and it basically consisted of men chanting ‘Nessus Waspus.’ I know that doesn’t sound like very good listening but it was to us and Sam liked it so much he used to sing it around the house.

Of course, Homer followed up his Iliad with the Odyssey, the story of the Greek hero Odysseus’s journey back from the Trojan War to his home in Greece. That’s the very appropriate name for Sam’s tour company of course. As for the wolf logo – I can’t really explain that but it could have something to do with the family obsession with dogs.

But In Search of the Trojan War was only a warm up for Sam. The series he – and we all – also really liked was the next Michael Wood documentary adventure: In the Footsteps of Alexander the Great. This time MW was on the trail of the Macedonian conqueror, a journey that took him from Macedonia and Greece via ferry to Turkey, across the Middle East, into Afghanistan, Pakistan and India. Is this traveling adventure history starting to sound familiar? If you throw in a bicycle you have Bike Odyssey.

Our favorite part of In The Footsteps of Alexander was when Michael W. pretended he was Alexander scaling the wall of a castle, much to the delight of some local Afghans who all gave him a friendly round of cheers and applause when he reached the top! Of course Sam has also turned his skills to history documentary making as well. In On Hannibal’s Trail, also by the BBC, Sam presented a modern version of Michael W’s 1990s effort. This time, instead of scaling a castle, Sam scaled the snow capped Alpine mountain La Traversette, but didn’t want to leave his pannier laden bicycle behind, so when the trail disappeared he pushed it up! You can see a short clip of this effort here:

Alexander the Great’s campaign trail is not yet on the Bike Odyssey circuit and unlikely to be for a while (!) No worries – there are plenty of other epic campaign trails to sign up for with Sam and his team as your veritable, credible and enthusiastic guides: Hannibal – that takes you from Barcelona to Rome, Lionheart – from Venice to Paris, and Che – following the route of revolutionary Che Guevara’s ‘Bicycle Diaries’ through spectacular mountain and wine country in Chile and Argentina.

So when you’re pedaling those wheels on the next Hannibal tour and looking forward to a gourmet meal and excellent accommodation, consider how it all started – thirty-odd years ago in the creative brain of a bright eight year old.