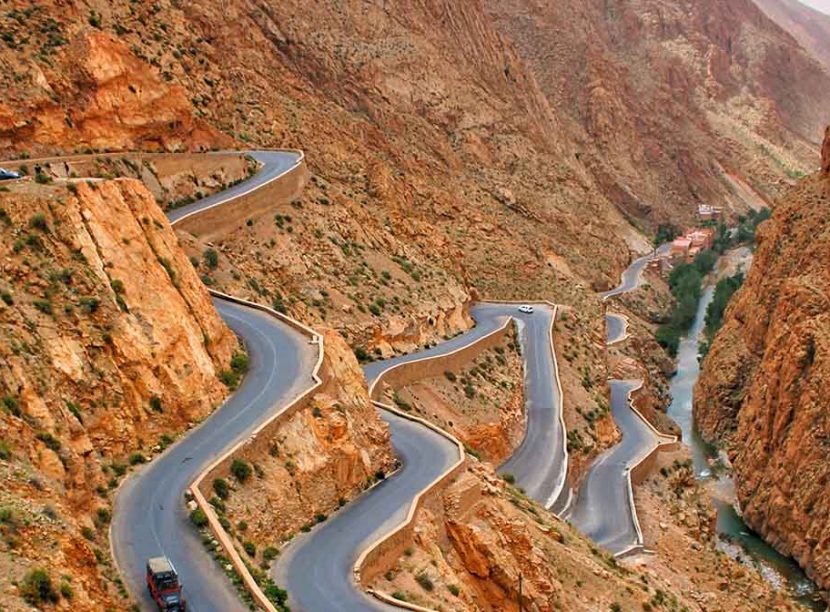 What a day! In setting up Othello in Morocco we wanted to cover the great known locations but also break new ground for bike touring beyond just crossing the country and the Atlas Mountains multiple times!
There are some amazing locations along a path somewhat trodden by tourists – nothing like mainland Europe – but certainly known outside of Africa. From Marrakesh to the High Atlas, Ait Benhaddou to the Sahara desert – these are spectacular spots, but we had a desire to ride where no one had taken road bikes before. The opportunity came first at the Dades Valley and Todra Gorge. Two spectacular locations we wanted to visit.. of the few bike companies who travel to this region, only some visited one of these locations. We knew we could do better!
This is idyllic Morocco…. Nomad trodden paths, pink-tinted rocky rugged valleys and two-tone kasbahs. The Dades valley is dotted with mudbrick palaces and lush oases, hence its nickname – the Valley of a Thousand Kasbahs. Todra Gorge…a 300m deep ravine split through the orange limestone. With the cliffs rising above you, it is so tight you literally have to squeeze through next to a beautifully clear river. The approach is thrilling, especially on a bike descending, as though the doors of heaven were about to close before you!
So as Bruno and I surveyed maps, chatted with locals over mint tea and discussed with hotels our hopes for the tour we suddenly had a thought…….nomad trodden paths…surely that means we can get through too even if it means 4wd only for a short shuttle! Luckily our support team in Morocco includes two 4wds as well as our usual 9 seater van and trailer. So with a bit of scouting and the engagement of one of our local hotels to add a third 4wd an epic and unique day on tour was born. We can more than confidently say although we generally avoid shuttles, this one is spectacular and worth it. This day ride is unique (as are many on this tour) and it will be one of the most memorable days on a bike anywhere in the world!
From our itinerary the daily description is here, along with a fly through of the route itself (note that the fly through includes the 40km shuttle hence the longer km and bigger elevation!)
Itinerary Description

We loved setting up this day! We have joined together two of the best riding locations in Morocco. The Dades Gorge is the pin-up road of Morocco – amazing switchbacks rising out of a Palm filled valley. On the other hand, the Todra Gorge has 300m high cliffs rising above a snaking road and crystal clear waters. In the morning we will head up the Dades. It is beautifully quiet and a gradual ascent with the occasioanl challenging switchback. At the top, as the road turns to gravel, we will meet the vans for a picnic lunch overlooking the mountains. Then a short 40km gravel transfer over to the top to the parrallel valley…then we will jump back on our bikes for a sensational 30km descent through the valley and into this sheer cliffed gorge. This is truly one of the most memorable days on a bike you will have anywhere.

If you fancy a little less climbing this morning then jump in with us and we will shuttle you up to the most picturesque spot in the Dades Valley. Grab a photo or two then get a lead on the pack!