We Zigged, We Zagged, We Zagora'd!! - Riding on the Marrakesh Express
Skip to content

This may sound mad but what better thing to do than ride 100 miles into the heart of the desert! Today is another cracking day. With multiple options on the bike you could choose to genuinely ride downhill for over 100km! All those metres you climbed in the Atlas you now get back.

For the first section we ride on open lands with occasional patches of olive groves and you wonder what could be ahead… However, at the 45km mark having climbed the Tiz n’Tinififft (yes correctly spelled and the only significant ascent of the day!), the riding is unmissable. With views over enormous rocky sedimentary massifs we traversed then gazed down into the historic Draa Valley and out into the Sahara beyond. 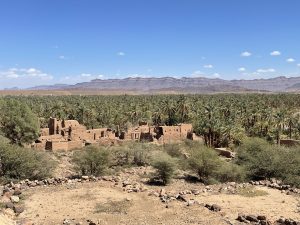 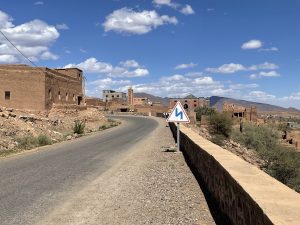 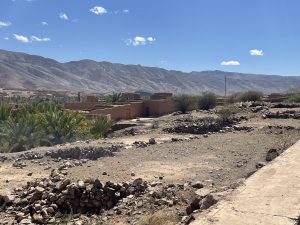 The Draa is amazing (read more below) and with a perfect surface, a bike path which gradually descends, Berber villages, palm groves and beautiful rocky vistas, it is another great day on the bike. We are heading to Zagora, the gateway to the Sahara caravan routes and the end of the road! From here we will embark on our desert adventure! 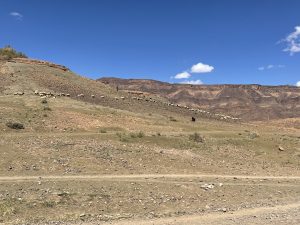 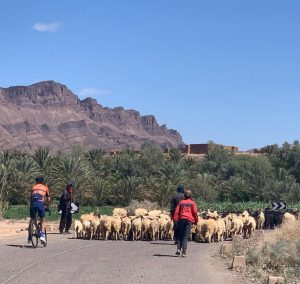 The Draa is amazing (read more below) and with a perfect surface, a bike path which gradually descends, Berber villages, palm groves and beautiful rocky vistas, it is another great day on the bike. We are heading to Zagora, the gateway to the Sahara caravan routes and the end of the road! From here we will embark on our desert adventure!

Our home for tonight… 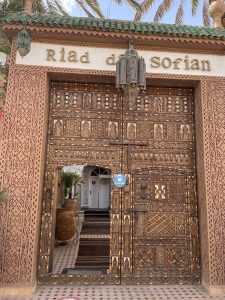 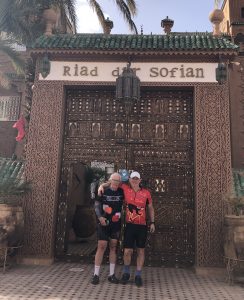 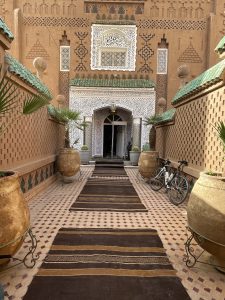 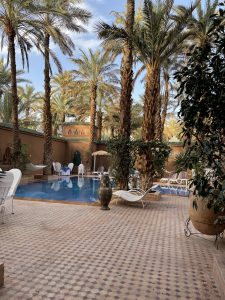 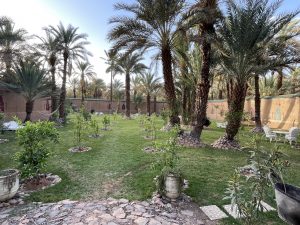 From Ouarzazate, the road plunges southeast into the Draa Valley, formed by a narrow ribbon of water, Morocco’s largest river, from the High Atlas that occasionally emerges triumphantly in lush oases, particularly between Agdz and Zagora, a stretch of about 95km.

During ancient times, the river of Draa crossed the desert and traveled hundreds of kilometres west until it joined the Atlantic. Today, most of this river has dried up, but its path still leads through one of the most fascinating landscapes in Morocco.

The beauty of the Draa Valley is not only its geographical richness – the valley has thousands of years of history, evidenced by the ancient cave paintings and carvings found in the area. It was in the Draa Valley where archaeologists found the statuette of Venus of Tan-Tan, one of the oldest prehistoric sculptures ever discovered. Moreover, the Draa Valley was once an important transit point on the trans-Saharan caravan trading routes, as well as an important trading center for Jewish, Arab, Berber and Christian civilizations.

The camel caravans which crossed the great dunes of the Sahara desert began in antiquity but reached their golden period from the 9th century CE onwards. In their heyday caravans consisted of up to 12,000 camels travelling from North Africa, across the desert to the savannah region in the south and back again, in a hazardous journey that could take several months.
The first established caravan route seems to have been between Wadi Draa (today’s ride) and the Ghana Empire (southern Mali) in the mid-8th century CE and passed through an area of the Sahara controlled by the Sanhaja Berbers. Within 50 years major routes were exapanding as far as Gao and Timbuktu on the Niger River – the great North African cities of Marrakesh, Fez, Tunis, and Cairo were all important starting or destination points for the trans-Saharan caravans.
From around 1450 CE Portuguese ships were sailing down the Atlantic coast of Africa and offering an alternative to the trans-Saharan caravan routes. From 1471 CE, these ships were accessing the aptly-named Gold Coast in the south of West Africa. However, the rise of the Songhai Empire (1460 – c. 1591 CE) ensured that there was still a huge market and supply of goods for Saharan traders to exploit in the savannah region.
More about this tomorrow!.
Post Views: 0