"Hello Motha, Hello Fatha, Here I am at Camp Grenada"! - Riding on the Marrakesh Express
Skip to content

Granada is from the latin word for pomegranite fyi.

Granada is literally in the foothills of the Sierra Nevada, it is very hilly and one is constantly walking up and down steep cobble stoned  roads, good footwear is a must(of course I don’t have any with me!!). We are here on Saturday and Sunday and it is a lively place, many young people due to the fact that Granada has a large renowned university.

The story of Granada is all about the Islamic Moors. Throughout the Middle Ages — for over 700 years — Spain was a predominantly Muslim society, living under Muslim rule. And that age shapes the city we are in and today’s sightseeing agenda. Granada’s dominant sight is the Alhambra, the last and greatest Moorish palace. Nowhere else does the splendor of that civilization, Al-Andalus, shine so brightly. For two centuries, until 1492, Granada reigned as the capital of a dwindling Moorish empire. As Christian forces pushed the Moors further and further south, this palace was the last hurrah of a highly sophisticated civilization.

Granada  is the capital city of the province of Granada, in the autonomous community of Andalusia, Spain. Granada is located at the foot of the Sierra Nevada mountains, at the confluence of four rivers, the Darro, the Genil, the Monachil and the Beiro. The hillside land between the rivers form 5 finger-like areas on which the city was built and fortified. The city sits at an average elevation of 738 m (2,421 ft) above sea level, yet is only one hour by car from the Mediterranean coast, the Costa Tropical. Nearby is the Sierra Nevada Ski Station, where the FIS Alpine World Ski Championships 1996 were held.

The area was settled since ancient times by Iberians, Romans, and Visigoths. The current settlement became a major city of Al-Andalus in the 11th century during the Zirid Taifa of Granada.[6] In the 13th century it became the capital of the Emirate of Granada under Nasrid rule, the last Muslim-ruled state in the Iberian Peninsula. Granada was conquered in 1492 by the Catholic Monarchs and progressively transformed into a Christian city over the course of the 16th century.[7]

The Alhambra, an ancient Nasrid citadel and palace, is located in Granada. It is one of the most famous monuments of Islamic architecture[8] and one of the most visited tourist sites in Spain. Islamic-period influence and Moorish architecture are also preserved in the Albaicín neighborhood and other medieval monuments in the city. The 16th century also saw a flourishing of Mudéjar architecture and Renaissance architecture,[12] followed later by Baroque and Churrigueresque styles. Granada is also well known within Spain for the University of Granada which has an estimated 82,000 students spread over five different campuses in the city. The pomegranate (in Spanish, granada) is the heraldic device of Granada.

After sleeping in until 8am and a sumptuous breakfast in the hotel dining room with a view overlooking the city, we headed over to La Alhambra for a tour. 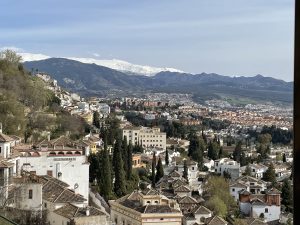 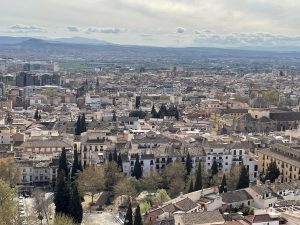 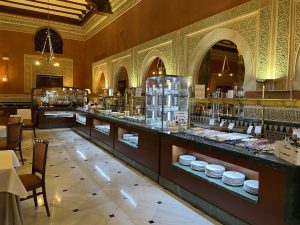 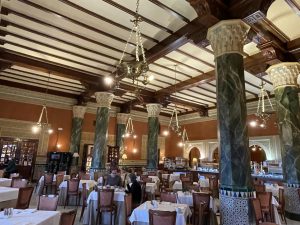 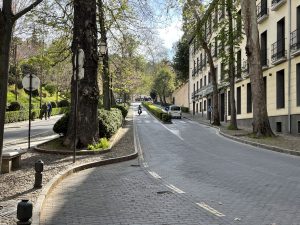 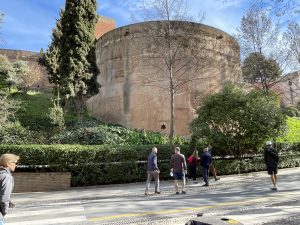 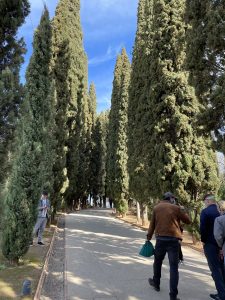 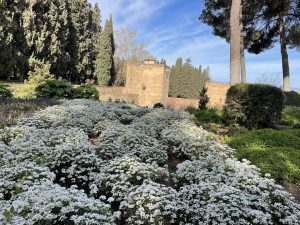 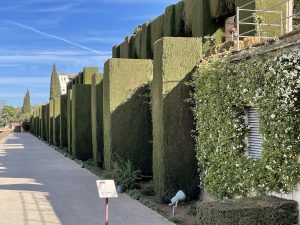 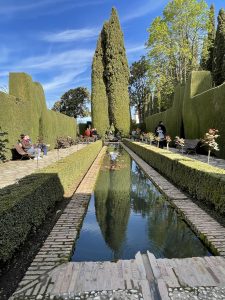 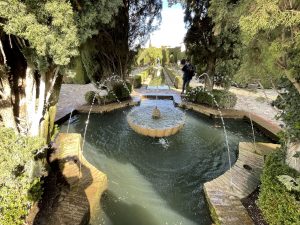 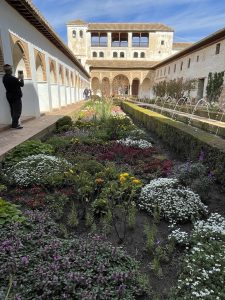 These exact gardens have been tended since the 14th century! 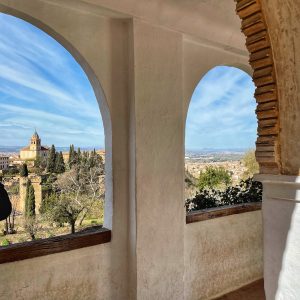 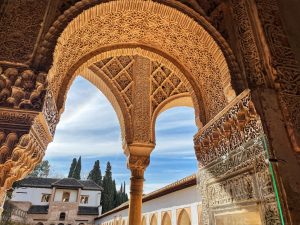 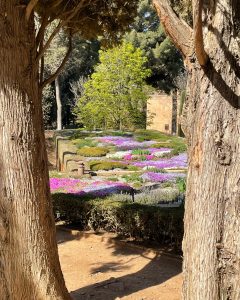 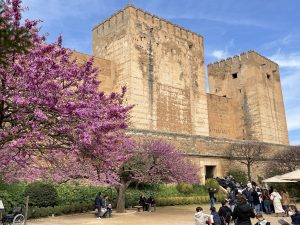 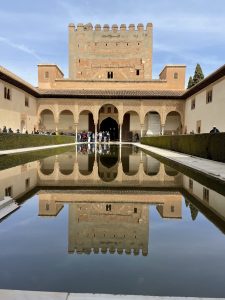 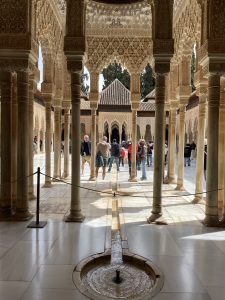 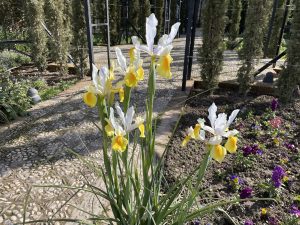 Having this rest day, it gives me a chance to tell you about the folks I am riding with.  I am riding with some very accomplished people and excellent cyclists/athletes, and pretty sure I am  not in their league . I thought I would take a paragraph each day to highlight these fellow riders…they ride hard, drink hard and laugh lots! ‘The names have been changed to protect the innocent’….no they haven’t, they’re all guilty as hell!  Here are the first 4: 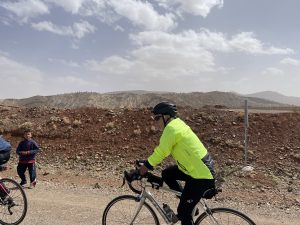 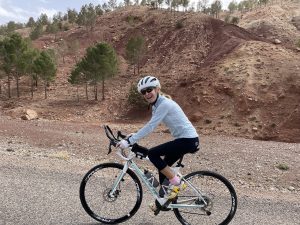 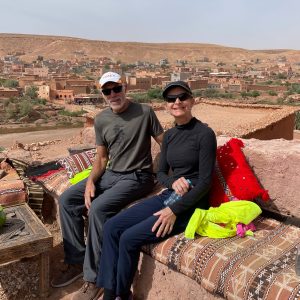 2. Joanna, from Sydney Australia. Jo splits her time with her long time partner and now husband Jose between Sydney and La Scala Spain, has a successful background in the financial industry and as Jose puts it, “we follow the sun”. Jo is first a runner and a later entry into cycling, competing in triathalons, half Ironmans and full Ironmans in Australia, New Zealand, Austria and Lanzerote. Jo rides with what I describe as a ‘dogged and focused determination’, and this lovely lady knows how to party…I wish I had her stamina! 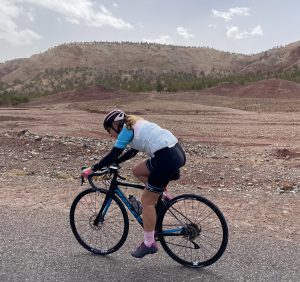 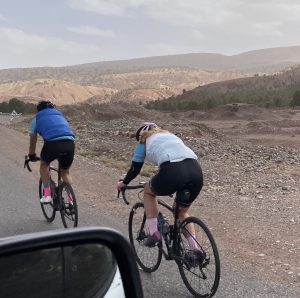 3. Tim, from Young Australia. Tim has an economics background but has had and still has a successful farm as shepherd, at any one time having more than 6,000 head of sheep! He harvests merino wool for market. Tim has been cycling for just 12 years but in that time has ridden EFI the entire North and South American Pacific west coast, ridden the Ride the Divide twice, and circumvented Spain and France several times as well as Norway and the Arctic Circle. A wonderful guy, great sense of humour and never one to turn down a pint!  Sorry to see him leave early to go home to tend his flock. Cheers mate! 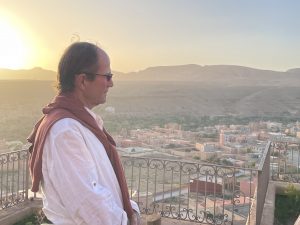 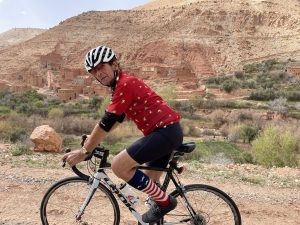 Tomorrow we are back at it…stay tuned!

Note: have a sore throat and stuffiness, the guides asked me to take a rapid test, results negative….I’m kitting up tomorrow baby!