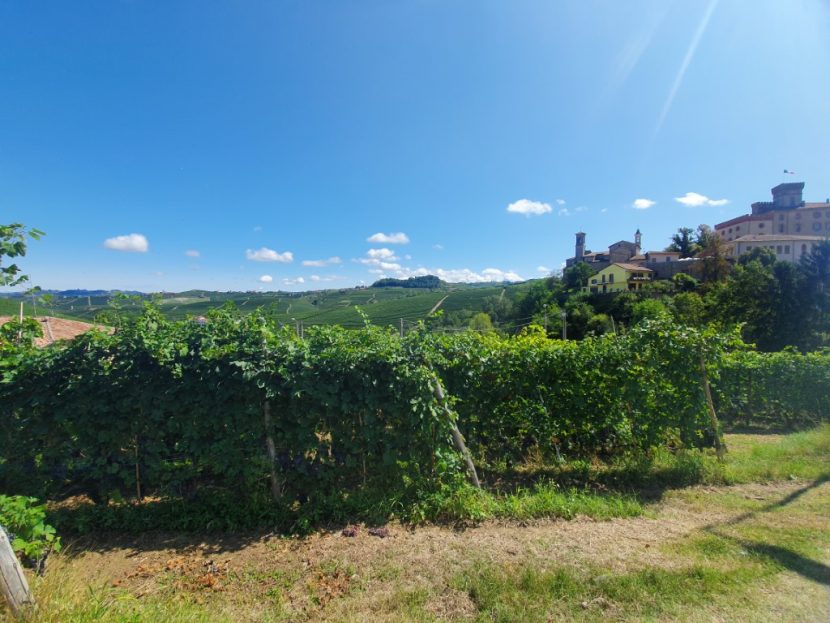 Our ride today took us into the heart of the Piedmont region along some of the most stunning ridge lines a cyclist can find. We headed into the region of Monferrato and crossed the Tanaro River on our way to the famed Langhe hills. Considered the spiritual home of the nebbiolo grape this area gave birth to a number of Italy’s most esteemed wines including the ‘King of wines’ – Barolo – and the renowned Barbaresco. Our destination was the beautiful town of Alba which is famed both for its truffle fair and the heady scent of nutella that permeates the air.

Lunch was in Barolo in a beautiful outdoor cafe….along with some vino of the Barolo variety, we stuffed ourselves with primo piati of handmade ravioli, then white truffle risotto followed by tagliatelle bolognese….we passed on the secundi piatti because we had to ride a further 50 km to the town of Alba. But we did have dessert and espresso!!

This is such a lovely area to ride along the Langhe vineclad ridgelines, and with a flat day after so many in the mountains, this was an extra loop to tempt many riders.   I am glad I picked up the extra loop of riding….Fantastic riding in the Piedmont ( needed the extra loop to burn off lunch and the vino!!)

Barolo is a red Denominazione di Origine Controllata e Garantita (DOCG) wine. It is made from the Nebbiolo grape and is often described as one of Italy’s greatest wines The zone of production extends into the communes of Barolo, Castiglione Falletto and Serralunga d’Alba. Barolo is often described as having the aromas of tar and roses, and the wines are noted for their ability to age and usually take on a rust red tinge as they mature. Barolo needs to be aged for at least 38 months after the harvest before release, of which at least 18 months must be in wood.
Destination – Alba

Alba (Latin: Alba Pompeia) is a town and comune of Piedmont, Italy, in the province of Cuneo. It is considered the capital of the UNESCO Human Heritage hilly area of Langhe, and is famous for its white truffle, peach and wine production. The Confectionery group Ferrero is also based there.