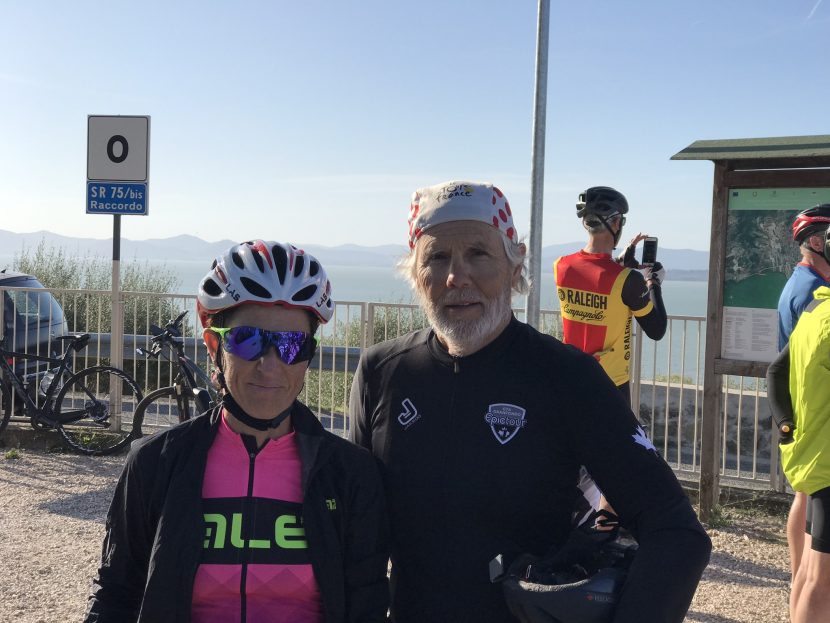 Leaving Cortona we headed south to Lake Trasimene, scene of one of Hannibal’s greatest victories. Local authorities have set up signs to describe the battle between Hannibal and the Roman army as you skirt the lake so we had the opportunity to take our time this morning and appreciate the history.  From here we headed to the Museo di Annibale, a brand new museum opened in 2017 dedicated to Hannibal and the battle.

We rolled around the lake and down to its shores where we enjoyed coffee before continuing south into the heart of Umbria. Umbria has it’s own beauty – it is a little more rugged and less pristine than Tuscany but equally as beguiling. Our destination tonight was Todi, another lovely little hill-town with a 4 km, 15%avg. grade final climb challenge to boot!

A special part of today was the chance to ride with former pro cyclist and Tour de France and Giro d’Italia winner Fabiana Luperino. I rode out of Cortona for 10 km and then again for the final 10km of our route. 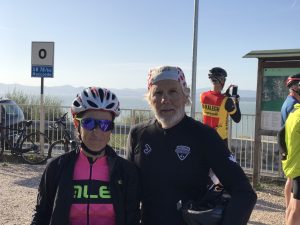 The extra loop took us deeper into Umbria and to the home of Sagrantino – Montefalco which we tasted tonight. The route adds around 800m of elevation and 49km.
Field Notes – Umbria

We rolled into the ‘green heart’ of Italy today – Umbria. It is the only Italian region having neither a coastline nor a border with other countries. The regional capital is Perugia. Umbria is known for its landscapes, traditions, history, artistic legacy, and influence on culture. The region is named after the Umbri people, an Italic people who were absorbed by the expansion of the Romans. Contained within Umbria is Cospaia, a tiny republic created by accident that existed from 1440 to 1826.
Destination: Todi

Todi is perched on a tall two-crested hill overlooking the east bank of the River Tiber. In the 1990s, Richard S. Levine, a professor of architecture at the University of Kentucky, chose Todi as the model sustainable city, because of its scale and its ability to reinvent itself over time. After that, the Italian press reported on Todi as the world’s most liveable city! According to the legend Todi was built by Hercules, who here killed Cacus, and gave the city the name of Eclis. Historical Todi was founded by the ancient Italic people of the Umbri, in the 8th-7th century BC.
Hannibal Notes – Lake Trasimene

We traversed the north side of Lake Trasimene through a town called Sanguineto meaning ‘river of blood’ after the horrible fate of the Roman army at the battle of Trasimene. Hannibal again outwitted his Roman counterpart leading the Roman consul into a trap and slaughtering 15000 Romans. Post Trasimene, the Romans began to understand that they couldn’t defeat Hannibal. A general Fabius came up with the tactics which gave him the title in history ‘the delayer’. His method was to never engage Hannibal in battle but to follow him and ensure he couldn’t roam too widely – he hoped to wear down the Carthaginian general but the Roman people were not used to giving such respect to an enemy commander. It would not be long before their patience ran out.