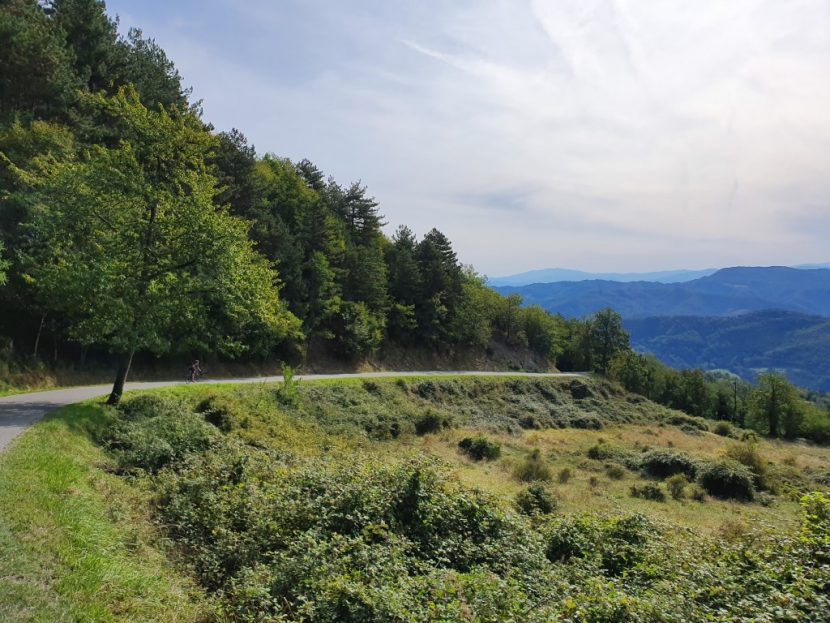 Often referred to as the ‘spine of Italy’ the Apennines cover the length of the peninsula of Italy. Our ride today took us up to the Tuscan- Emilian border in the heart of these mountains. Our route is historically accurate and also spectacular as we rolled up through the foothills to Montecorone and Zocca, two incredibly photogenic medieval villages. The sometime rough roads are definitely worth this gorgeous route. After  lunch  we followed the ridge line before dropping into the Porretta valley where Hannibal marched his troops south!

These are probably the most consistently bad paved roads I have ever ridden, ever since the summit of Col d’Agnel right through to the end of today’s ride. Today we have arrived into the region of Tuscany.

The Apennines are a mountain range consisting of parallel smaller chains extending c. 1,200 km (750 mi) along the length of the peninsula of Italy. In the northwest they join with the Ligurian Alps at Altare. In the southwest they end at Reggio di Calabria, the coastal city at the tip of the peninsula. Today we crossed the Tuscan-Emilian Apennines via the Passo Radici (1529m).
Destination – Poretta Terme

Famous since the days of yore for its hot springs, Porretta Terme is a charming village amid the Apennines, on a ridge between the Emilia-Romagna and Tuscany regions. Albeit known and appreciated by the Romans, a medieval legend boosted the town’s fame for its healing thermal water. According to the tale, a suffering ox left free to roam around by his owner went to quench his thirst at one of the hot springs surrounding the village. Being healed when he came back, the word spread about the powers of the hot springs, and ever since then the watering ox became the symbol of Porretta Terme’s coat of arms.

Hannibal Notes: Hannibal crosses the Apennines
After Hannibal’s victories in the north and at Trebbia he finished his Winter with the Boii to both strengthen his ties with this powerful tribe but also to rest up after his amazing entry into Italy. As Spring broke in 2017 BCE he headed along the north side of the Apennines through the fertile Po Valley. He knew he had to cut south at some stage over the spine of Italy to avoid hitting the Rome’s main highway, the Via Flaminia. Carefully considering his choices, according to Polybius, Hannibal led his army south of Bologna through the Collina/ Poretta pass over a relatively low point of the mountain range and then past modern day Florence (which was basically a swamp 2000+ years ago!) toward Arretium (Arezzo).

One thought on “Day 24: Tuscany, the Next Hannibal Conquest!”