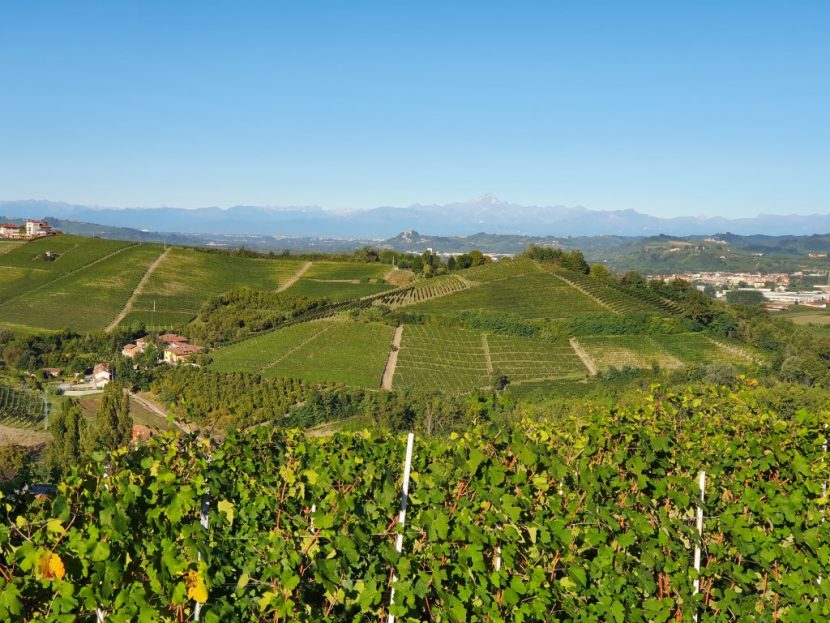 Leaving Alba( home of Nutella) we once more enjoyed the stunning ridge lines afforded by the Langhe hills as we headed into the Monferrato towards Acqui Terme. However the day started out overcast and by lunch it started raining, which continued for most of the afternoon. there we crossed the Bormida River and meandered our way towards our final destination near the town of Gavi. In doing so we followed in the tracks of some of the greats of Italian cycling who hail from this part of the world including the ‘campionissimo’ Fausto Coppi. On arrival at our fantastic hotel we had the opportunity to enjoy one of the regions finest white wines – Gavi di  Gavi.  This wine accompanied us our a guided tour of the very old wine cellars until the hotel, and to our Michelin star restaurant 5 course dinner.

This was a long tortuous ride in the rain but the dinner and the wine made it as fellow rider Bruce reminded us that  “life is good in  Gavi!”

Tomorrow is a rest day and the the start of Stage 3 of our Hannabalistic ride to Rome. So sleeping in, a little laundry, find a bike shop  and a wander around this winery hotel and the town of Gavi

Fausto Coppi grew up and rode on many of the roads we traverse today – indeed you’ll see a number of signs that remind you of just that. In Italy he is known as Il Campionissimo, or champion of champions. He won the Giro d’Italia five times (1940, 1947, 1949, 1952, 1953), the Tour de France twice (1949 and 1952), and the World Championship in 1953. Other notable results include winning the Giro di Lombardia five times, the Milan–San Remo three times, as well as wins at Paris–Roubaix and La Flèche Wallonne and setting the hour record (45.798 km) in 1942.
Hannibal Field Notes

Not far north of here is the river Ticinus where Hannibal’s cavalry skirmished with their Roman counterparts. The battle was fairly even before Scipio, consul of the Roman army was wounded and his army then retreated to the Trebbia where the first major encounter was to take place. Hannibal must have been unsure of his chances – his men had hardly recovered from crossing the Alps and his army was a third of the size it had been when it left Barcelona. He made some Gallic prisoners fight to the death in front of his men. He said the winners would go free with horses, food and money, the losers would die and be forgotten. After the gladiatorial contests he turned to his men and told them they faced the same life and death choice!
Destination – Villa Sparina

In the heart of the Gavi district stands the stunning Villa Sparina estate, dually serving as a world-class winery and a Relais & Chateaux property. Beppe Caviola leads the way in the winery, exploring the full potential of the Cortese grape in his Gavi wines. Federico Curtaz, formerly of Gaja, oversees the vineyards. Field Notes – Gavi Fortress

The imposing fortress that can be admired on the top of the Gavi rock is the outcome of centuries of history, military evolution and defence needs that varied over the centuries. From the strategic location, it can be assumed that a castle existed here as long ago as pre-Roman or Roman times. From the 16th century we know that the castle was modernised into the structure we see today.

The fortress became then absolutely impregnable, it could also accommodate a garrison of considerable dimensions. The castle was the scene of its last battle during the Napoleonic period. The fortress, in fact, was the last French stronghold to withstand the Austro-Russian army before Napoleon’s victory in Marengo, on 14th June 1800. The fortress was completely disarmed during the second half of the XIX century and it became a criminal jail, which continued to be up until the beginning of the following century. During the two world wars, it became a prisoner-of-war camp.