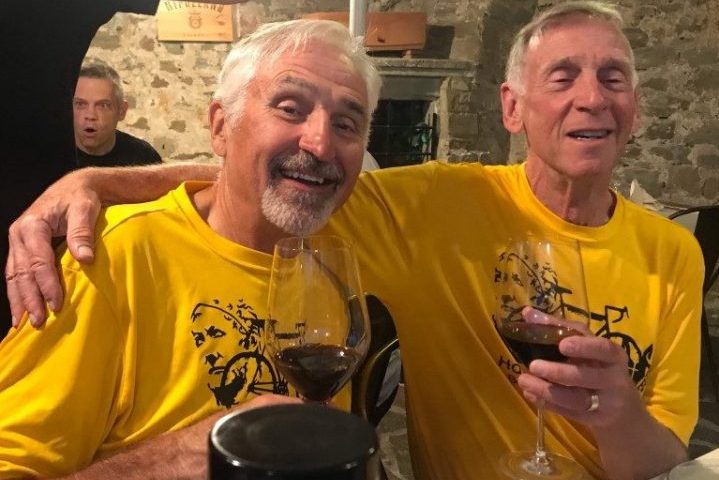 Hannibal might never have breached the Servian walls of Rome but we found a way into the heart of the city alongside the Tiber River, and conquered the Romans in our own way. From the tranquillity of our hotel but n a steady rain, we embarked towards the Eternal City. Initially we followed the signs for the Via Flaminia before skirting the verdant Parco Veio. Before we reached the banks of the Tiber we had a bit of climbing to do as we discoverd that there are more than just the Seven Hills within the Imperial City. All but two of the ‘grupetto’ stopped at the last summit of our trip, putting us at 157,000 ft of vertical climbing, with 30 km to go to reach Rome. Our final destination is the lively district of Trastevere. Wet and tired we had completed our journey, retracing most of what the great General Hannibal’s route was. Fortunately for us we rode into the heart of Roma on a paved bike path almost no the Tiber River. After congratulating each other and a group photo, we cleaned our bikes and packed them in our bike bags. A little rest and then a final feast of 5 courses and some more great wine. A trip of a lifetime complete and a lifetime trip of memories to savour!

The Tiber is the third-longest river in Italy, rising in the Apennine Mountains in Emilia-Romagna and flowing 406 kilometres through Umbria and Lazio, where it is joined by the Aniene river, to the Tyrrhenian Sea. It drains a basin estimated at 17,375km sq. Popularly called flavus (“the blond”), in reference to the yellowish colour of its water, the Tiber has advanced by about 3km since Roman times, leaving the ancient port of Ostia Antica 6km inland. The source of the Tiber consists of two springs 10m away from each other on Mount Fumaiolo.
Destination: Trastevere, Rome

Trastevere is the 13th rione of Rome. Its name comes from the Latin trans Tiberim, meaning literally “beyond the Tiber”. By the time of the Republic c. 509 BC, the number of sailors and fishermen making a living from the river had increased, and many had taken up residence in Trastevere. Immigrants from the East also settled there, mainly Jews and Syrians. The area began to be considered part of the city under Augustus, who divided Rome into 14 regions (regiones in Latin); modern Trastevere was the XIV and was called Trans Tiberim.

Trastevere is a charming medieval neighbourhood. A stroll around this formerly working-class district with a heady nightlife, will take you away from the crowds to the hidden corners of Rome.

Eventually Rome sent an equally capable general to Africa to attack Hannibal’s home town of Carthage. Hannibal was recalled and defeated. Unlike Rome who bounced back again and again, Carthage and Hannibal only had one life and they surrendered. Hannibal retired into politics and was briefly tolerated by Rome but soon set out to the east to rouse kingdoms against his eternal enemy. At the age of 62 he was tracked down by the Romans and surrounded, he took poison saying “Let us now put an end to a life which has caused Rome so much anxiety”. The story of Hannibal is etched in history for all time, and his military stratagems are still taught in the major military schools around the world!