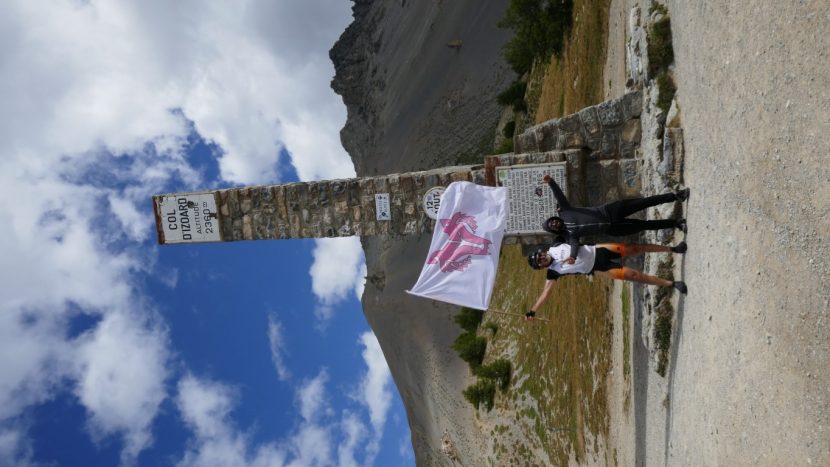 A serious climbing day with Col du Galibier as a mid-morning optional loop.  After climbing into the Haute Alpes Isère we then descended for 30km into the pleasant town of Briançon for lunch. After lunch we took on Col d’Izoard, a Tour de France regular and another spectacular climb. The day, to say the least,  was challenging! We ascended to the quiet village of Saint Veran, the highest community in Europe, surrounded by 3000 metre peaks, where our Alpine lodge awaited.

We departed La Grave in 0 C degree weather and summited the Galibier at -4C and high wind. The descent was bone numbing, as was the descent from Lautaret to Briancon. Izoard was also quite tough, especially the 10% sections!

The very name ‘Galibier’ means something significant. These days it lends itself to a cycle clothing company, a PR firm, a capital management company, a Bugatti supercar, a minimalist house track, a management consultancy in Brisbane, and a turntable manufacturer in Colorado. All of them are trying to tap into a meaningful, semi-spiritual quality of this climb, with varying degrees of success.

Reaching 2,642m in altitude, for a long time it was the undisputed physical peak of the Tour de France.

A handful of Tour climbs are now higher, but none are so renowned. While most places count the days until the return of the world’s biggest bike race, the Tour itself counts down the days until it can go back to the Galibier and have a little bit of the mountain’s magic sprinkled on it once again.

The first time the Galibier featured in the Tour de France, on July 10, 1911, only three riders got their crude single-speed bikes up the sloppy track to the summit without walking. The last time the mountain appeared was in 2011, 100 years and 11 days after its debut.

Its scale is vast. It dwarfs even the most imposing of high mountain passes elsewhere in Europe. The Col du Tourmalet is half a kilometre lower in altitude, and the climb from the bottom to the top is half as long.

One man who knows the Galibier well is Andy Schleck. Now retired, he took the most famous victory of his career in 2011 when the Tour de France finished on top of the col for the first, and so far only, time in its history. It remains the Tour’s highest ever summit finish.

“You don’t find any other climb that is comparable to Galibier, you are so, so high up. It’s not like one of these climbs where you look up and see the trees above you, you just go up and it’s like you’re riding into the sky….The scenery and the small roads going to the top so high up is what makes it, for me, the most beautiful climb in France.”

One of the best pure climbers of his generation, Schleck conquered the Galibier on stage 18 of that year’s Tour with a long-range solo move from over 60km out, cresting the Col d’Izoard before dropping down into Briançon and tackling the Lautaret and Galibier, two cols he says go together “like gin and tonic”.again.

The first time the Galibier featured in the Tour de France, on July 10, 1911, only three riders got their crude single-speed bikes up the sloppy track to the summit without walking. The last time the mountain appeared was in 2011, 100 years and 11 days after its debut.

When Philippe Thys, 4 times Tour de France winner, finally reached the summit of the Col d’Izoard in 1922 he had not yet finished the day’s stage. Incredibly he had started on the Riviera in Nice, representing a 274km sea-to-mountains epic.

Henri Desgrange, Tour de France founder and notoriously hard taskmaster, probably thought he was giving his charges a rather easy time of it at least in terms of distance; he’d already subjected them to four 400km-plus stages that year, including a brutal 482km outing from Les Sables d’Olonne to Bayonne which dispatched half the length of the country in one go.

Of the Izoard itself, the pitiless Desgrange had mused: “The task at hand is so difficult that our riders won’t think of battling any more until the end of the race.”

That Nice-Briançon route became a 1920s staple, while in the 1948 and ’49 Tours, with the Coppi-Bartali rivalry in full swing, the pair took it in turns to lead the race over the Izoard having set out from Cannes, also on the coast. It would be the last time the peloton was treated to a medicinal lungful of sea air before taking on the Izoard.

The following year in 1950, Louison Bobet, darling of the mountain, entered into the fray. He would go on to become the only rider to have led over the col three times and in 1953 he sealed overall victory on its sun-bleached slopes when he won alone by more than five minutes in Briançon. A year later he led over again and was subsequently honoured alongside Fausto Coppi with a memorial in the Casse Déserte.

The mountain maintained a steady profile in the Tour over the next decade but regained a popularity in the Seventies not seen since the early part of the century. First blood went to — Eddy Merckx. Locked in a one-on-one struggle on the lower slopes with Cyrille Guimard, Merckx ultimately rode the Frenchman, flailing and overgeared, off his wheel at the top of the valley before plunging into the woods alone. He soloed over the mountain and into Briançon to his fourth stage win that year.

A week later he won his fourth Tour by more than 10 minutes. “I’d heard about the Casse Déserte, and the Fausto Coppi memorial,” said Merckx afterwards, “but I saw nothing. I’m afraid I was rather busy.” Three years later, in 1975, the unforgiving mountain turned on the champion, authoring a downfall that must have been unthinkable at the time.

French pretender Bernard Thévenet had secured yellow when Merckx blew catastrophically on the climb of Pra Loup on stage 15, and could do nothing the following day as, under a blazing Bastille Day sun, Thévenet distanced him in the valley meadows halfway up the Izoard. Having ultimately finished the stage at Serre Chevalier more than two minutes ahead of the Belgian, Thévenet’s exploits were lauded by none other than Louison Bobet, who gushed: “You’re not a great champion until you’ve crossed the Col d’Izoard alone in the maillot jaune.”

Race foward to July 20 2017, when the mountain has a new vigour — a summit finish. Warren Barguil (Team Sunweb) continued his superb Tour de France with a summit finish victory on the Col d’Izoard, cementing his place at the top of the mountains classification. The Frenchman attacked with Alberto Contador (Trek-Segafredo) near the foot of the climb but left the former champion behind to hoover up all the breakaway riders to claim his second stage win at this year’s Tour de France.
Saint-Véran

In the heart of the “Parc Naturel Régional du Queyras” Nature Park, at a height of 2042 m, Saint-Véran prides itself on being the highest inhabited village in Europe. In the village, which is made up of several quarters, the wood and stone chalets tiled with slate, the fountains, bread ovens and sundials are all typical of “everyday” local heritage, while the many chapels and mission crosses bear witness to the inhabitants’ beliefs and this remote location.