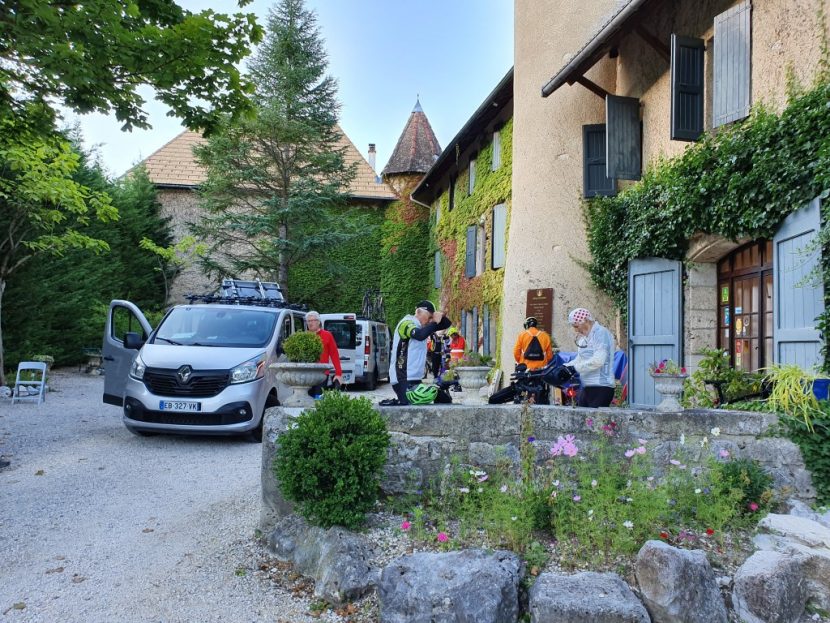 We leave Piedmont today as we headed up into the hills of an area known as the Oltrepo Pavese. This name refers to its geographic position to the south of the mighty Po River and in the proximity of the university city of Pavia. Today’s ride took us into a far more rustic and rugged area of Italy. Untouched by tourism we rolled our way through southern Lombardy past the Sant’Alberto di Butrio into Emilia Romagna. For the next 3 days we will traverse the northern edge of the Apennines.

Today was another tough day riding on what is called in the Giro d’Italia as ‘il muro’, or ‘the wall’, which are a series of hills in succession having grades of between 10 to 25% !! So it is like hitting a wall, struggling to climb up them. Today we had 3 serious ones and 2 lesser ones, the elevation profile shows this…

But the weather was ideal and scenery again outstanding. And another good talk by historian/author Ben Kane, and a great 4 course Italian feast!

Field Notes – The little monastery of the blind monk

The small but charming abbey of Sant’Alberto di Butrio is one of the must-sees of the region. The 11th century hermitage is situated on a hill amidst the woods of the western border of the Oltrepò. The isolated position of the monastery, that consists of three interconnected churches, makes it ideal for getting into a meditative mood. Inside you will see a number of beautiful medieval (15th century) fresco’s and the moving simple room of the blind brother Frate Ave Maria (yes that was really his name).
Field Notes – Oltrepo Pavese

We cycled through an area of Italy called the Oltrepo Pavese today. This is an area of the Province of Pavia, in the north-west Italian region of Lombardy, which lies to the south of the river Po. It is oltre (‘beyond’) the Po, when considered from the provincial capital Pavia and in general from the rest of Lombardy. In 2014 CNN ran a report describing the area as the ‘Tuscany of Northern Italy’.
Castello di Rivalta

Tonight we stayed in a ‘borgo’ that has been owned by the same family for over 800 years. Situated on the River Trebbia – site of Hannibal’s first major engagement with the Romans in Italy – the Borgo of Rivalta dates back to 1025 and was an incredibly atmospheric spot to spend our rest day.

It was December and bitterly cold and wet and Scipio’s Roman army was mostly raw recruits. Scipio urged caution but Longus, his co-consul, was keen to engage.

This confidence was in spite of a defection from the Roman camp by several thousand of their Celtic allies, who went over to Hannibal. A key part of the Carthaginian General’s strategy was to win over the Celts in northern Italy who were considered important but not very reliable allies in his war against Rome. In fact, Hannibal, wary of assassination by these fickle friends, is thought to have worn wigs to avoid being recognised.

Hannibal – an expert in the psychology of war and aware of the impetuous nature of Longus – set his trap. He sent his youngest brother Mago with a hand picked force to hide in some reeds near a bank of the Trebbia, the river is little more than a stream nowadays.

The location of our hotel is very atmospheric – A lovely green valley extends upriver – it so captivated Ernest Hemingway when he was here during World War II that the local newspaper quotes him as describing it as ‘the most beautiful valley in the world.’

In a move that would start the battle, Hannibal sent his Numidian cavalry to harrass the Roman camp at first light and lure them out. Longus eagerly complied and sent his men across the swollen and freezing river towards the Carthaginian army. The Romans were now cold, wet and hungry (they hadn’t had breakfast) and for these reasons were perhaps beaten before they had even started fighting. They were so cold in fact, that they had trouble drawing their weapons when they reached the other side of the river after wading through its freezing waters.

The description of this intense cold in Livy and Polybius rang true when we cycled this back in 2009 with tents! Our night in Rivergano campsite was one of the coldest we had experienced so far, including our Alpine passage. Waiting for the Romans on the other bank the Carthaginians were fresh, had breakfasted and had kept warm around their campfires. They had the better of the early engagement then Mago sprung from his hiding spot – “a manoevre which threw the whole Roman army into confusion and dismay” (Polyibus III.74) and all was lost for the Romans.