End of an Epic - On Hannibal's Trail
Skip to content

The morning of our second day of riding in Tunisia was spent at a spectacular ancient Roman ruin: Dougga.    There seemed to be no-one there except us and an army of caretakers restoring old walls.  Dougga is on top of a hill and as you enter the site you hit the very well preserved Roman theatre.  But there are a lot of good Carthaginian related remnants as well.   Beyond the temple, next to a tethered donkey, was a big Temple of Saturn-Baal with its large front columns and stone structure and floor slabs intact.   An interesting mixture of gods! – Saturn the Roman god of the harvests and Baal, the supreme god of the Carthaginians.     Then we curved back to the centre of the site past more temple ruins, a gathering of feeding sheep whose heads were invisible because they were shoved inside a bail of hay (quite strange), the remains of the forum and also dozens of houses and shopfronts along paved roads, with their lower walls heavily restored but still standing.  Peeping over the top of an olive grove there was also an impressive tower like mausoleum, described as in the ancient Libyo-Phoenician style.   A great way to start the day! But we had to get going, partly because we hadn’t had breakfast yet!  That was causing something of a minor panic and there wasn’t much around to be eaten – or at least not that we could find quickly and easily.  We ended up with that spicy mixture of fresh tomatoes and chiles on bread and a bowel of olives.  It was served by a man with few teeth, who showed us his black gaps when he was warning us to be careful eating the olives.  One of my teeth fell out into my cereal on the trip so I considered comparing my hole to his but thought better of it.  After that challenging breakfast, we cycled on a little warily. 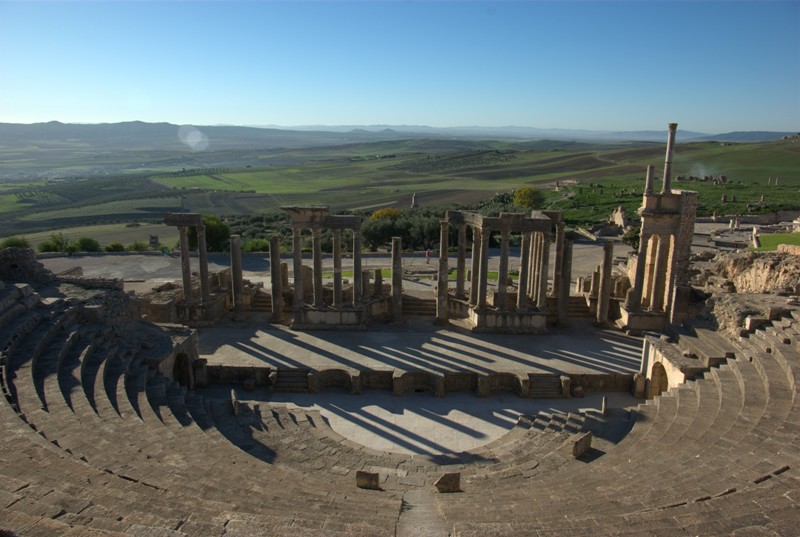 The theatre at Dougga 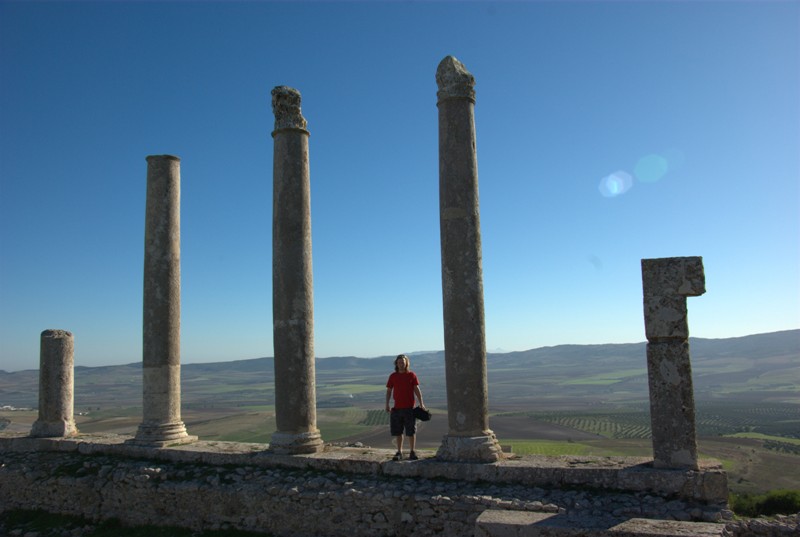 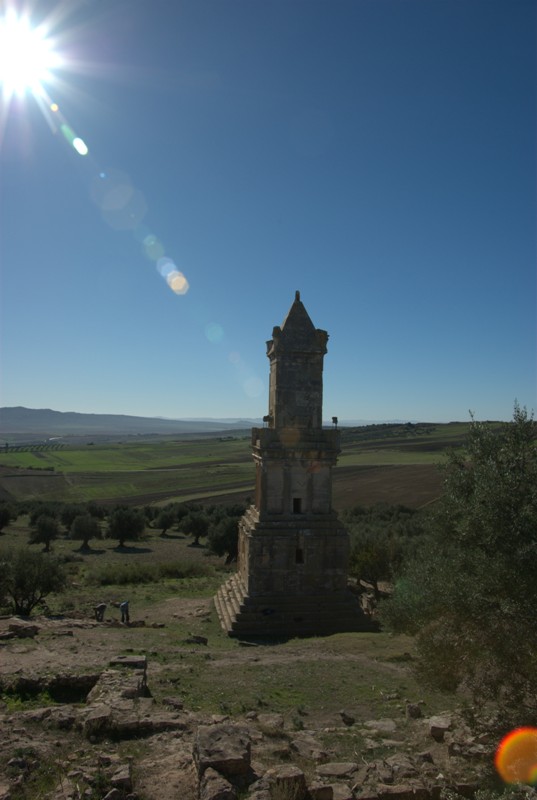 These last days on the road felt very good, partly because of the new landscapes we were enjoying.  The countryside in Tunisia is like being in the middle ages and reminded me of those delicately painted scenes that you can see on paper room dividers in Asian houses where one man is in the field scattering seeds, another is riding up a track, a couple are on the balcony of their wooden house, to the left of them, a river running through a wood.  That was what the landscapes were like in Tunisia – lots of simultaneous activities were visible from the seat of the bicycle that looked like they should have been happening a thousand years ago.

We also felt happy because we were coming to the end of our epic.  However amazing the trip, ten weeks is a long time and the prospect of home and being still for a while was very appealing.

But the action wasn’t over yet.  Near the town of Siliana, adjacent to Zama, the police took an interest in us and escorted us into town in their green and white jeep and then tried to make us continue riding towards the next town that was a good 15 km away, when all we wanted to do was stop, rest and have a drink.  There wasn’t a lot of logic to their argument except the insistence that further on was much nicer than Siliana.  Ben politely conversed with them in broken French for a while and we managed to extricate ourselves.

In the end, our visit to the last important part of the Hannibal story, the battlefield of Zama, was very memorable.  Zama, or Jama, is a little village about 140 km south west of the city of Tunes that is thought to be on the site of, or at least near where the Battle of Zama was fought.  This is the historic battle Hannibal lost to the Roman general Scipio, ending the Second Punic War with Carthage surrendering.  It was very strange to be gazing over this battlefield after thinking about it for a couple of years.  We didn’t really have any expectations about what it would be like when we got here –  the dusty farmland, olive groves and mountains in the distance seemed to fit the bill.   But I don’t think any of us have ever heard a donkey, sheep, chickens and a dog all making noise at once.  Zama is the battle that changed the course of history, but the battle changed little at Zama.    The locals were still riding donkeys and seemed to own a few scattered cows and little else.  The cluster of white houses were dusty and without windows.   Water was fetched from a fountain down the hill.  Little children chased us and laughed us past.   You felt a world away from Europe, but only a few hours away in a car another name that belongs to the past, Carthage – described by Ben in the last blog –  was now a wealthy suburb of the capital with palacial houses that you would see in any prosperous Mediterranean city.  The contrasts were really stark in Tunisia. 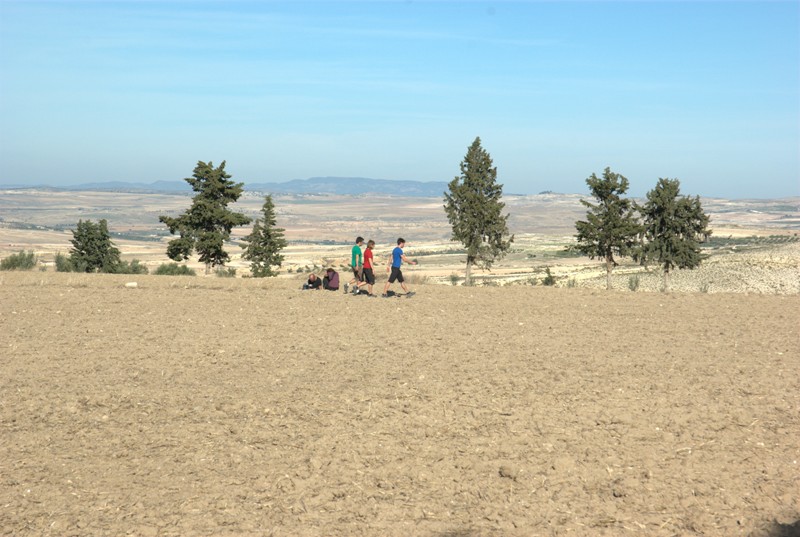 The battlefield at Zama? 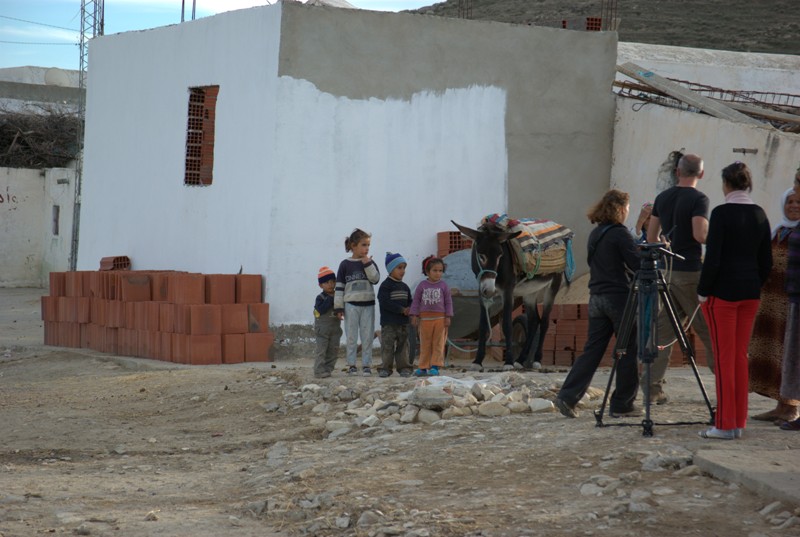 This is being written from a comfortable chair in the sitting room of my Granny’s home in London.  The trip seems like a dream.  But we are back from something real, and it was great. 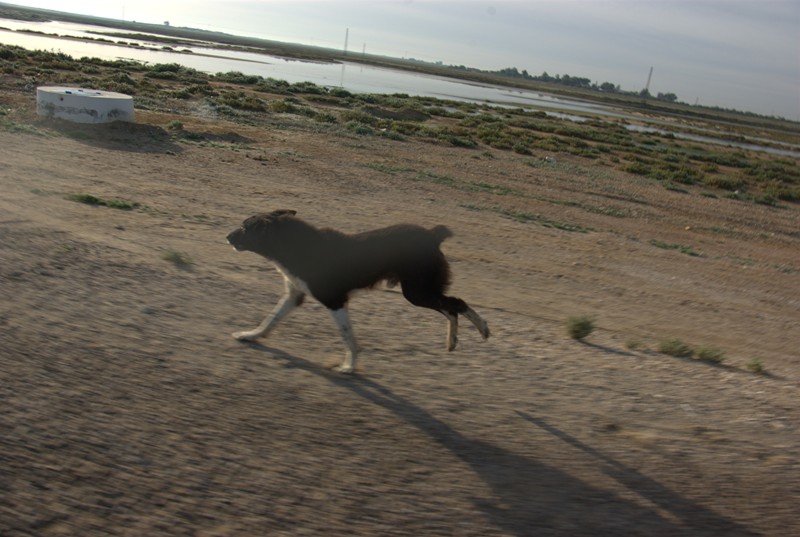 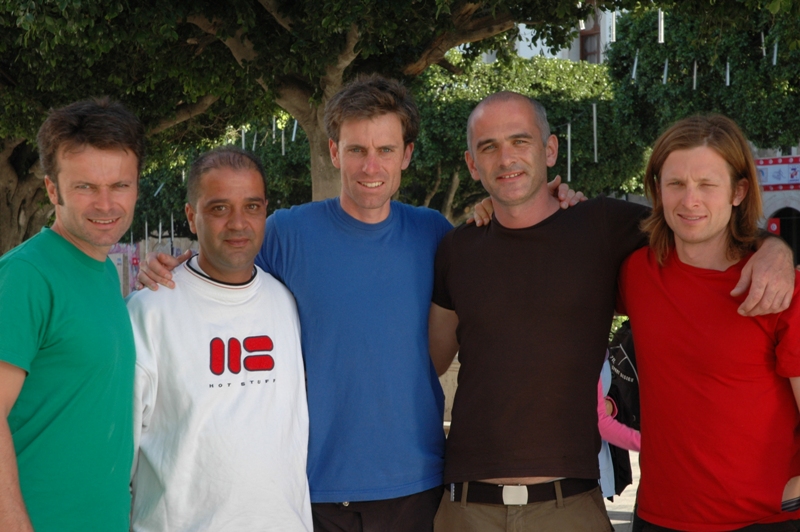